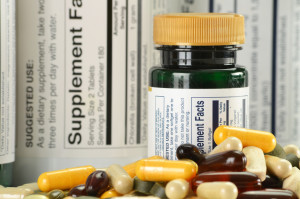 Fish oil. The oldies used to drink it down to make themselves…er…regular. However in the last two decades fish oil, and more importantly the Omega-3 fatty acids contained within fish oil have become the cure-alls for almost everything from joint pain to heart disease, depression, autism, ADHD and Parkinson’s disease. In Australia the fish oil supplement industry is now worth more than $200-million. And perhaps, unlike, glucosamine, the impacts and effects of omega-3 have been almost constantly studied since the 1970s. So…are the results in yet?

What we do know is that fish don’t actually make omega-3. Instead these fatty acids are accumulated in the marine foodchain by smaller fish eating fatty-acid-making microalgae…or bigger fish then eating those smaller fish. Herring and sardines contain by far the most omega-3, and barramundi the least.

The breakthrough discovery of omega-3 benefits can be traced back to a 1975 study of the Inuit people living in Greenland, when it was noted they had an extremely low rate of cardiovascular disease and enjoyed a diet with twenty times the omega-3 consumed in Europe. As a result the American Heart Association now recommends consuming 1000mg of fish oil daily. The NIH has also found omega-3 will reduce triglyceride levels, cardiovascular disease and high blood pressure. And what’s good for the heart is good for the mind too, with separate studies in Australia and Britain finding omega-3 delays or prevents the onset of schizophrenia in 13 to 24 year olds who had previously suffered delusions – only three percent taking omega-3 developed the disease, compared to the twenty-eight percent of those taking a placebo. However studies into improved cognition, mood and depression have not been so conclusive.

As for rheumatoid and ostearthritis, studies into the impacts of omega-3 have been ongoing for the last two decades. Despite the two being somewhat different in cause – rheumatoid being an auto-immune disease where white blood cells attack and destroy joint tissue and osteoarthritis being a process of wear and tear, both see varying relief from fish oil. Sufferers of rheumatoid arthritis seem to be the big winners from omega-3 – in one study, a daily intravenous dose of this fatty acid stopped pain in less than a week. A Brazilian study found a daily 3000mg oral dose of omega-3 resulted in rheumatoid test subjects improving their grip strength and mobility, and reducing pain and fatigue.

For osteoarthritis sufferers, the results aren’t quite so clear. Laboratory tests show that when omega-3 is added to cartilage tissue, the cartilage is less susceptible to inflammation or wear, suggesting fatty acids guard against degeneration of joints. In practice this isn’t confirmed, although some studies have found pain reduction in test subjects over a six month period. Most recently, a 2013 Harvard study found combining omega-3 with aspirin (salicylic acid) offered better results. Their combined anti-inflammatory properties dramatically reduced the inflammation that can cause arthritis and heart disease, with the two acids remaining in the inflamed tissues longer when combined than when taken individually.

So how best do we get omega-3? Well, it’s not just found in fish oil and fish – nuts, seeds, eggs, oysters, prawns, octopus, beef, veal and lamb contain varying quantities, and there is a strong debate regarding the consumption of fresh food for your omega-3 rather than taking capsules. A 150gram serve of sardines will deliver a dose of 3753mg of omega-3 (almost four 1000mg capsules), while an egg will provide only 36mg. Even a tin of salmon has 2169mg. And then there’s the question of krill oil capsules versus fish oil – is there a difference? Despite what the packaging says, 1000mg of omega-3 from a krill or a fish is still 1000mg of omega-3, there’s not much in the way of evidence that krill oil is any better than fish oil. In the end, your decision about  getting some omega-3 should be based on how much you like fish, how much you want to spend, and how much pain you have in your joints. Daily doses of 3000mg are usually recommended.