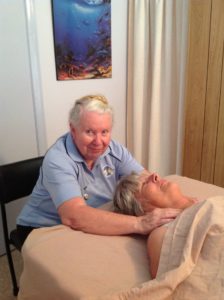 End of an era for Bowen Therapy Pioneer!
In her seventies, and after more than 20 years of helping others live pain free, June Setter has decided to retire.
A pioneer in the field of Bowen Therapy for North Queensland, Mrs Setter is well loved by many who know her gentle touch and healing hands, but it was son Benjamin who brought her to the healing modality.
After pursuing a career in Queensland Health Administration, and already in her fifties, Mrs Setter watched on as a healing Bowen Therapy experience transformed Benjamin to a Bowen devotee.

“My son, Benjamin, was involved in a bad accident, where he was knocked off his bicycle.” she said. “His helmet was split in two, and he had gravel rashes, abrasions and severe injuries to his knees. He had just completed a massage course, and a friend examined him and decided he was in too much pain for ordinary massage, so she suggested Bowen instead. “Benjamin was a bit sceptical after the first treatment, but his whole body rapidly improved, so he completed his training, and opened his first Bowen Therapy Clinic in Townsville.”

That was the beginning of a family business that has endured the decades to eventually include Benjamin’s wife Cindy, and his mother, who went on to expand services to Ayr, Ingham and Charters Towers. “I was working in Administration in the Health Department, Townsville. When I finished working for the day, I joined Benjamin to help him out changing beds, paperwork and telephone. Eventually the practice became so busy that Benjamin asked me to train to be a Bowen Therapist too.”

This was the beginning of a wonderful 22 year working relationship with my son, as well as meeting new clients, and helping with pain relief. “It never ceases to amaze me just how quickly Bowen relieves severe pain. The great benefit is that it works, no matter what age – new-borne baby, or my oldest client who was 102.”

We would like to thank the Editor Francine Pullman and all Staff of the Sun Newspaper for this wonderful article!