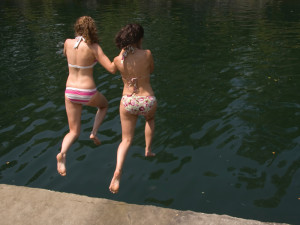 All right – you’ve got a change in mind. You want to find a new job, find a new hobby, find a new sport. Whatever it is, at some point you will have to shift from wanting to, to actually doing it. The big step, the leap of faith, a visit to the right shop or website, the first phone call – it can start with a thousand different things, but they all have one thing in common…they must happen. Without starting that change, that change won’t happen. You want to make something happen? Well, you’ve got to do something. Staying on the couch, driving to the same places, eating the same thing…that’s not change…that’s coasting in your comfort zone.

Forbes Magazine has calculated that just eight percent of people who make a New Years Resolution actually make it happen. That’s ninety-two percent of us who took the effort to think of something we wanted to change but gave up at the first hurdle – the start. Why? An obvious problem is making our change or goal so huge we don’t know where to start – not being able to find the starting line means reaching the finish is entirely impossible. Another big issue is not having a clear enough change or goal in mind. Thinking that it would be nice to go somewhere different can be a bit too vague.

So what to do? First, keep your change simple. If it’s a pathway to something big, that’s fine, but make sure the starting point is easy to find and achieve. Want to write a book? Then write one page as your first task – don’t sit down thinking you’ve got War and Peace ahead of you. Being overwhelmed is a fast way to giving up before you even think of starting.

And make your starting point real…make it tangible. Don’t go saying, I want to lose some weight. The moment you make something ephemeral and wishy washy is the moment you don’t know where to start. Instead say to yourself I want to lose ten kilograms so I will climb Castle Hill every Tuesday and Thursday. By deciding on something fixed you bring certainty to your change and how you’re going to go about it. Where is the starting line? It’s Castle Hill next Tuesday. What do you want to achieve? I want to lose ten kilograms. Just like that you have a starting point and a goal…all you have to do is do it.