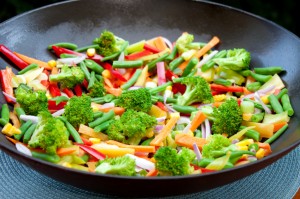 We live in a big globalised world these days and our eating habits have also become more and more globalised. Chinese one day, Indian the next, fish and chips another, meat and three veg when there’s nothing more interesting in the fridge. Our diets are now far more diverse than our ancestors’…ancestors who may have eaten pretty much the same thing day in and day out for their entire lives. Should we care? Well, there is some evidence we should. If your ancestors lived close by the sea your body may be genetically predisposed to a seafood diet. If your ancestors lived in central Europe or Asia your genes may prefer red meat and grains.

A classic example of this genetic predisposition is being able to drink milk as an adult. You may find it surprising, but to digest milk we need to have a specific enzyme in our gut, and this enzyme needs specific genes to be produced. In most people around the world, these genes switch off our milk digesting enzyme in infancy…but a genetic mutation found only Europeans keeps this enzyme production going throughout adulthood in what is known as Lactase Persistence. What does this mean for you? Eighty percent of people with a European background will have the genetic mutuation that allows them to digest milk. And having just one parent with lactase persistance will mean you should also have this mutation. However, if your ancestors came from Sub-Saharan Africa, South East Asia and China, there is very little chance of you being able to consume milk without suffering the telltale signs of bloating and discomfort commonly associated with lactose intolerance.

The interesting thing about this genetic mutation in Europeans is that it only appears in their bloodlines about ten thousand years ago when cattle were first domesticated. Before then, Europeans, like everyone else couldn’t drink milk either, so these mutant dietary genes can appear in a group of people with a specific diet fairly quickly…and remain in your DNA thousands of years later – which means your stomach may be expecting a diet very different to the one you’re giving it.

So what can you do about finding the diet you should be eating? For one thing, until recently most human populations have remained in more or less the same locations for long periods of time. There are some exceptions, of course, and countries like Great Britian where almost every European culture has ended up during the last two thousand years will make it hard for English speakers to track down the origins of their most ancient British ancestors. However, those with Scandanavian, German or Slavic origins will have an easier time finding out what kind of traditional foods are still eaten in those regions…and who knows, maybe pickled fish really will agree with you. It’s a whole new and healthy reason to investigate your family tree.

https://www.facebook.com/settersbowentherapytownsville/videos/976583432545531/ What is Knee Pain? Knee pain and knee injuries are extremely common, and they are caused in so many different ways. It is important to not only getting a accurate diagnosis of the knee injury, but also it is just as imp...